Evil Dead: The Game is a faithful adaptation, full of subtle and not-so-subtle homages to the classic horror series. You can visit iconic sites like The Nobie Cabin, Boomsticks, and Chainsaw Prosthetics, fight with a severed hand, play as your favorite cast member, or command armies of the Deadites as the series’ antagonist, the Kandarian Demon. I can see. He also recreated the first-person, off-axis camera effect from the films, synonymous with Sam Raimi’s directing style. But while these elements fill the title with fan service, none of them make for a very good video game, certainly not one that stands out in a growing subgenre.

Heterogeneous multiplayer games are inherently unequal, with each side traditionally offering a different approach – and play style – from its counterpart. And that’s what makes my time playing Evil Dead so frustrating: It’s almost incredibly one-sided to play two sides. And it’s mainly unbalanced.

The premise of the game is simple: a team of four survivors must remove the Kandrian Demon – which controls an opposing player – within 30 minutes by activating the Necronomicon. However, the survivors must solve two problems: the Necronomicon is missing pages, and a group of evil coverts called The Dark Ones are guarding the book. Therefore, the squad’s primary goal is to track down pieces of a map that are the Candarian Dagger and the Lost Pages of the Necronomicon – two of the franchise’s iconic MacGuffins – and use them to win matches. The goal of the Kandarian Demon is to prevent these events from happening. All players gradually increase their abilities throughout the game by collecting items and skill points. However, during the early game, the demon feels less effective (and a bit boring) as a leveling system shuts down its core abilities later.

If you play as a survivor, you’ll participate in a co-op shooter that incorporates nail-biting scares, solid combat, and light and dark while fighting waves of zombies controlled by a single opposing player. mechanics will offer. The cast of playable characters is complete with performances from the original film actors, including fan favorites such as Henry the Red, Cheryl, Kelly Maxwell, and four versions of protagonist Ash Williams. While the actors’ performances are mostly fine, they don’t seem to have been recorded in the same acoustic space. It’s not a big deal, but it’s noticeable and leaves me out of the experience at times.

In addition to the basics like health, ammo, and shields that you get from cleaning abandoned places, there are two systems you’ll have to manage as a survivor. The first is a simple flashlight with finite battery life. Obviously, the lamp illuminates the path ahead, making it easier to navigate in dark environments, but it also highlights hidden objects like special ammo that you would otherwise be unable to collect. I like this mechanic because it requires players to settle in their light consumption and adds up to the consequences of depleting the flashlight’s battery. You need to be strategic with your use of light because being in the dark or away from teammates increases the fear level of survivors, making them vulnerable to demon possession and the dangers of them and the opposing player. The middle forms an exciting cat-and-mouse relationship.

Being a survivor is enjoyable with the right companions; However, if you prefer to play as the solitary big bad, Kandarian demon, I struggle to recommend Evil Dead: The Game. As the antagonist of the match, you choose to control one of three demon armies and then use their unique abilities and units to eliminate a team of survivors or thwart their plan to exterminate you. The puppet army specializes in electricity, telekinesis and superior capture. The Warlord Legion, led by Deadite Henrietta Nobi, specializes in up-close encounters with brute force and poison gas abilities. Finally, fan-favorite antagonist Evil Ash leads the Necromancer Legion, specializing in summoning, buffing, and reviving fallen ministers. Each army has a different play style, making it satisfying to explore the various strategies from match to match. 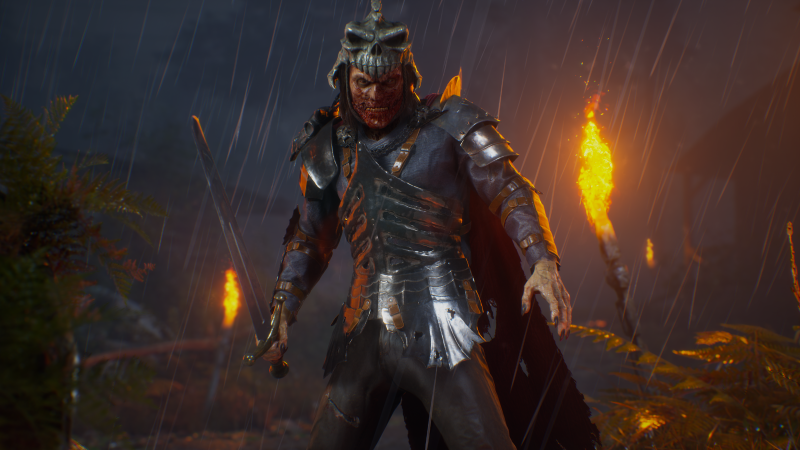 Normally, the assassin is my favorite role in odd horror games, but playing as the demon often feels like controlling a domestic poltergeist knocking plates off a shelf, whose presence is more of a nuisance than an impending evil threat. Monster’s gameplay loop includes exhausting cooldowns, unsuspecting traps being laid to scare other players, and the monotonous act of flying around the environment to collect energy any time your resources deplete. This results in a bizarre amount of downtime, even when the intensity should be at the end of the match.

The best part of controlling the Kandarian Demon is strategically placing portals of summoning Deadite to ambush careless players or persuade them to flee into the dark, where their fear levels will rapidly rise. Once a player is intimidated enough, you can keep them and wreak havoc on their teammates with shotguns, chainsaws, or whatever weapons they have. The game is at its peak in these moments. However, the fun is often short-lived due to the minion’s small health bars, your extremely hard ability cooldown, and how easy it is for survivors to flee battles (especially since you have to collect energy orbs together). To that last point, it’s frustrating to expend energy keeping a nearby deadite attacking a player, only to find a player barely overtaking you. These scenarios are frequent and a waste of energy ornaments that are already exhausting to acquire, and are not fun.

Evil Dead: The Game Has Two Large Maps At Launch, With A Third One, Castle Kander army of darkness, coming via free DLC in the coming months. The unnamed maps have some unique points of interest like The Noby Cabin, Flight 666, or Misery Manor, but most of the places are unremarkable. However, despite their lack of personality, they are beautiful. Post-processing effects such as fog, lens debris, and bloomed highlights create a film-like look that helps sell the horrors of the environment. 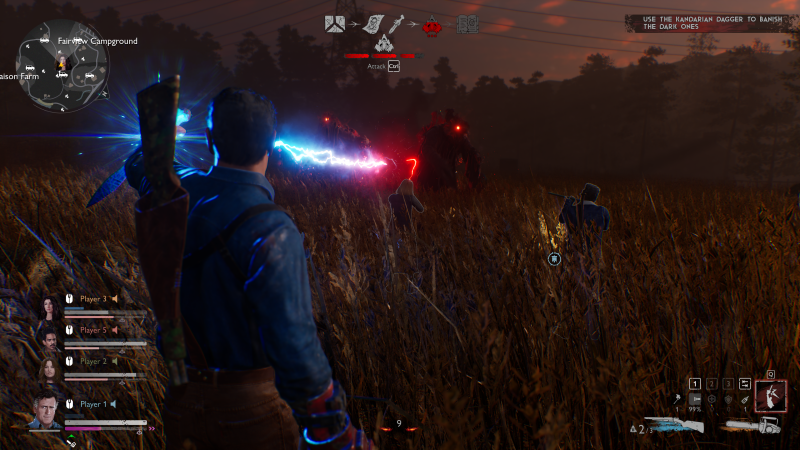 Despite its beauty, Evil Dead lacks polish. Characters get stuck on apparently flat surfaces, items pop out of containers unnaturally, and matchmaking lobbies are often interrupted by player disconnects. And the many little frustrations drag the experience down even further. For example, as the Kandarian Demon, you can have vehicles for up to 100 energies. However, since you need to accumulate those resources when you cast an ability, you can’t drive a car if you only have minimal power because possession slowly empties your energy bar. This leads to scenarios where you would spend all your energy owning a car, thinking you were going to have a strategic advantage, only to lose control soon after. The game lets you write checks you can’t cash, and the result is a frustrating waste of resources.

The good news is that future updates should address most of my minor complaints, but the game is an unrelenting glitch at release. Developer Saber Interactive’s commitment to fan service is admirable, and tough eval dead Fans will find this release enjoyable. However, it’s hard to see lasting appeal for the rest of us.